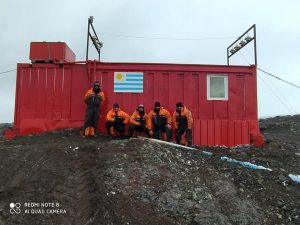 Uruguayan Ionospheric Refuge 62°10′59.4′′ South, 58°54′31.6′′ West,  takes its name by Ionospheric Lake Uruguay in its proximity. Recently an Uruguayan crew put their manual skills on full blast, and in a great teamwork. They refurbished the shelter located about 800 meters  from the Artigas Antarctic Scientific Base (WAP URY-Ø1), which can be used in case of evacuation.

The electrical and sanitary installation was renewed, and reforms were carried out in the structure that make the Refuge a much more comfortable place.

(Picture to the right, shows the Uruguayan Inospheric Refuge before its reconditioning). 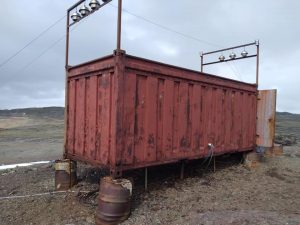 Artigas Base at 62° 11′ South, 58° 51’ West was inaugurated in the penultimate week of December 1984, after hard work of fellow who  overcame endless obstacles to the construction of their first buildings. The Chilean and Soviet collaboration in the transfer of the necessary materials was essential.

At that time, the Chilean National Antarctic Program, gave the refuge “Collins” for the use of the Uruguayan expedition.

At the light of these evidences, Uruguayan Ionospheric Refuge (Refugio Ionosférico Uruguayo), 62°10′59.4′′South, 58°54′31.6′′West Fildes Peninsula, King George Island ,  will enter  into the WAP-WADA Directory as WAP URY-NEW. As soon as an HF  Ham Radio operation from this location will be on air  a relater reference number will be given.

Now we are happy to have add another gusset to the  WAP Directory.