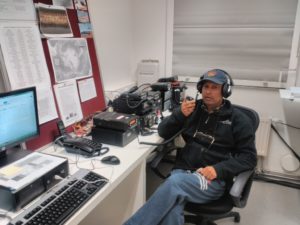 Antarctic Epic did start long ago with no way to communicate from Antarctica to the rest of the world, then Guglielmo Marconi, an Italian inventor and electrical engineer, known for his pioneering work on long-distance radio transmission and for his development of radio telegraph system, show the world the power of Radio transmission.

Later one after WW1 & WW2 the Nations signed the Antarctic Treaty and the Antarctic Adventure begun. From that time, in the 50thies, the Radio was the unique way to be in touch from the newly built Antarctic Research Stations and therest of the world.

From that time,  being a licensed Radio Amateur was a privilege of few technicians involved in the  Antarctic Campaigns and being Radio Amateur, they were mostly communication officers. After the commercial duties and communication with their country’s Antarctic Departments, they had time to use the Base Equipments to talk to the family using other Ham fellows with Phone Patch to talk to their families, and to other Ham radio men, all over the world.

A new era did start: DX with Antarctica and yes,  a contact using a simple Radio transceiver  from Antarctica to the rest of the world was,  and is still amazing. The interest did grow  fast and became a fever, a real excitement a real passion.

At that time every Antarctic Base, every Refuge, every remote camp was equipped with  Transceiver for HF communications, antenna, generator or other power supply sources.

Most of the Bases did install big towers and rotary antenna system, using amplifiers to allow more chance to send robust signals on the air. On the other side, the worldwide Ham community, hunting contacts with Antarctica, did the same; all involved in a kind of passion for the so called  very long distance call, known as DX. 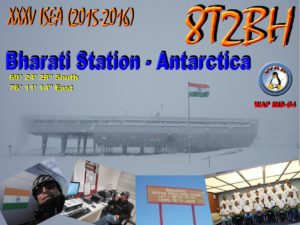 QSL confirmation for a contact with an Antarctic Station was, and still is something to exhibit. On the meantime the first websites dedicated to the Antarctic Chasers did start to be online, as for example WAP-Worldwide Antarctic Program www.waponline.it since 1979. On it several features  such as the most accurate Dbase (WAP-WADA) of Antarctic Stations, Remote Camps, Refuges, Huts and permanent settlements sorted by Country, Lat & Long and exact location.

Another huge Dbase (WAP-WACA) has been built; it  lists over 4500 different callsigns in use or used in the past in Antarctica, Sub & Peri Antarctic areas, all available for free on line.

Time goes fast and we did enter quickly in the era of Internet. Very few young  boys are still excited or fascinated by Ham radio, even if in Antarctica HF & VHF communications are still important and very much used to keep and establish contacts with remote field camps, with the researchers working outside, and with the helicopters or aircrafts to the main Stations or Bases.

Radio is probably considered by the young generation somewhat obsolete, something surpassed, something out of fashion … nothing could be more wrong! Radio remains a safe option in case of emergency, when internet black out, when other communication devises may fail, the radio remains, it does not need repeaters, as the radio waves propagate in space!

HF transmissions are therefore subjected to the Propagation condition which is influenced by the solar activity and in particular periods of the year,  operators must know the MUF (Maximum Usable Frequency) and check Propagation Prediction tables in order to know when and in which direction looking for to make some possible contacts 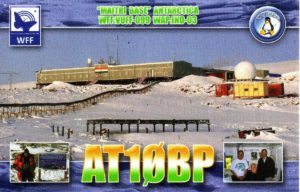 Bhagwati Prasad Semwal is a good experienced Ham Radio Operator, licensed as VU3BPZ, and operating from Antarctica since 2001. Bagwati Prasad (Ex-20,24,29th, Maitri & 31th,Bharati, WOT )has been active from several Antarctic sites as VU3BPZ/P, VU3BPZ/RI1, AT1ØBP, VU3BPZ/MM and actually he is part of the 35th ISEA (2015-2016) based at  Bharati Station (69°S, 076°E), Larsemann Hills, Antarctica where he operates as 8T2BH.

Worldwide Ham Radio Community is grateful to the Indian Antarctic Dept. for putting licensed Ham radio operators among the Teams overwintering in Antarctica; India did a real great job with the Hams involved in Antarctica up to now; a mention has to be given to: 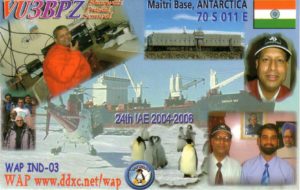 ATØA operating from Daskshin Gangotry Base in the 8Øties, AT3D, VU3HKQ, VU2AXA, VU2JBK, VU3RAY, VU2DMT who have been active from Maitri Base, Indian Bay and Bharati Stations giving a huge number of Antarctic chasers worldwide, a chance  to log all the 3 main  Indian Scientific Stations in their log with different callsigns.

Actually propagation is not in a good shape; solar flux, sunspot and A index are at a low level, but taking care of the rare openings on different bands, is possible to establish good contacts with a range of 10-15.000 km.

What is actually missed in the Indian Bases is a rotating Log periodic beam antenna, able to cover all HF bands in case of internet black out or emergency, a liner amplifier in order to ensure a robust signal in case of lack of propagation.

In addition another tool is available for Hams,  and that is the VOACAP Prediction available online at:

This web site gives an idea to a Radio operator  which band of the HF Band plan is the best one to be used  and percentage of chances to make good contacts. Actually conditions are very low and infact just the bands  from 18 to 24 MHz offer 40% of possibility to make contacts.

During the 35th Indian Antarctic Scientific Expedition (2015-2016) we did a lot of propagation testing on different bands from 10 mts through 40 mts SSB and we noticed a very fast changing conditions and so far only about 100 QSOs have been made as 8T2BH from Bharati Station, even if with 15 different Countries. Nothing to compare with 2011-2012’s season when the QSOs made were over 1000, or from Maitri Station where conditions were so much favorable.

Now  it could be propagation will change, no more Auroras or magnetic storms which are causing terrific noise on the band. I hope to be able to keep uphold the Indian pride and using the privilege to be here in Antarctica for the 5th time  as Ham Radio and Communication Officer to fulfill the many requests for QSOs by Radio amateurs operators around the world.