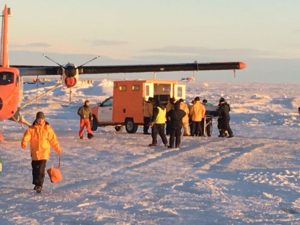 In an unprecedented operation, the Argentinean Armed Forces planned a medical evacuation of the second officer, electrician Héctor Bulacio, from the Orcadas Base to the hospital in Ushuaia. The 38-year-old man was in danger if thye did not move him; he had suffered fractures in his legs. A Rescue by sea was impossible because in winter time the Base is surrounded by 110 kilometers of ice field.

After a videoconference with the naval hospital of Buenos Aires, his air evacuation was decided.

A C130 Hercules aircraft took off from Río Gallegos, overflew  Orcadas Base and  by parachutes release medical supplies while a glaceologist of the Naval Hydrography Service was studying  the best surface in which personnel could improvise an emergency landing strip for a Twin Otter. From Marambio Base then took off the Twin Otter  that flew 720 kilometers from Marambio to Orcadas Base and,  in an unprecedented event, did land on top of a glacier on an improvised runway.

The Twin Otter transferred the non-commissioned officer to Marambio and from there the Hercules took him to Tierra del Fuego. The joint work and successful flights of the Twin Otter and the Hercules despite the climatic difficulties at this time of year, allowed the Sub-official Bulacio to be conscious and stabilized in the Hospital of Ushuaia where he is  “out of danger”.

More pics are available at the same link