The need to have a laboratory at sea level, on the coast of Marambio Island, arose when the research project on “methane hydrates” began at López de Bertodano Bay, Seymour Island, Antarctica. 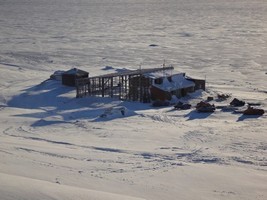 The boathouse is located on the coast of López de Bertodano Bay on Marambio (Seymour) Island at 64° 15′ 22.9″ South,  56° 44′ 23.4″ West, and its construction began in 2007 with the main purpose of serving as a logistical support base for studies on methane hydrate leaks.

Construction and improvements of the “Casa de Botes” stopped in 2016, being unfinished as well as the research project that motivated its creation, due to the lack of objective decisions by the DNA (DIRECCIÓN NACIONAL DEL ANTÁRTICO) and the IAA (INSTITUTO ANTÁRTICO ARGENTINO).

See: https://www.cancilleria.gob.ar/userfiles/ut/plan_anual_antartico_del_programa_antartico_argentino_2019-2020.pdf  In the year 2007,  its facilities were halfway there. They were not completed in due course; especially the large “shed” destined to keep land vehicles (4×4, 6×6) and snowmobiles, as well as smaller boats (Zodiac MK3 / MK4 inflatable boats and Zodiac Hurricane ZHT-733OB semi-rigid boats) essential to carry out the multidisciplinary research project on Methane Hydrates.

In the year 2008, the National Antarctic Directorate  designed Casa de Bote (aka Vallverdú boathouse) as a model logistical support point for the development of scientific and technical activities related to Earth Sciences, Life Sciences, and personnel training.

​Casa de Bote Marambio Hut (Boat house) at 64° 15′ 22.9″ South,  56° 44′ 23.4″ West,  López de Bertodano Bay, Seymour Island, Antarctica will be add to WAP-WADA Directory under ARG-NEW. A WAP reference will be given if and when an Ham Radio operation will come on the air from this site.
Note that Marambio Base (WAP ARG-21) is located at 64° 14’ South, 56° 37′ West, so that Casa de Bote Marambio Hut is relatively far away the Base, that’s why WAP considers it a new entity on WADA Directory.