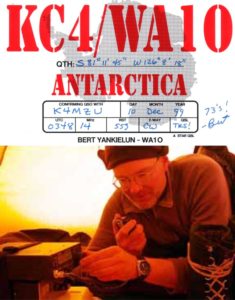 Now, thanks to Bob K4MZU who did contact the operator, we are able to understand what,  the coordinates reported on Bert’s QSL were about.

We were only a couple of miles from the original Byrd Surface Camp (WAP USA-20 ).  A radio tower was clearly visible, even at that distance, still sticking above the surface there, marking the location of the old and abandoned Byrd Station.

The NSF restricted us from visiting the site out of  “safety” issues and to prevent attempts to explore the long-buried facility. 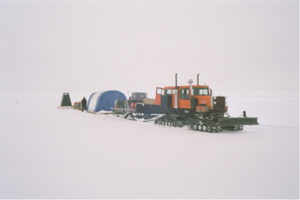 Here are two digital photos I have from that trip.
The remainder of my photos are in film format.  The camp basically consisted of the Korean War-era “Jamesway structure” (shown at the right) and a fuel bladder for refueling C-130’s.  There were also several “Scott Tents” for station crew and for  our traverse team while we temporarily stayed there. 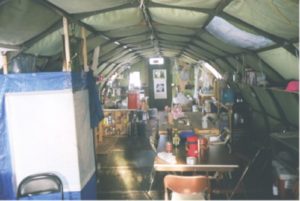 The second photo (on the left) shows the interior of the Jamesway.  Jury-rigged shower was the blue tarp structure on the left. Kitchen was in the background.

Radio desk and dining area would be in the foreground space. ( Pic below, shows Bert while operating HF). 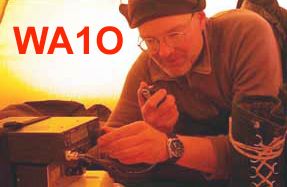 I was asked to return to Antarctica this last November on a project.

Unfortunately, funding collapsed for the entire effort. Later, last winter, I was informed that the mission might be revived this coming Nov. 2020 – Jan. 2021 season.  Given the issues with the virus, it is almost certain that the project will be canceled again for the coming season.   Beyond that, I don’t know…  Getting a bit old for the NSF to approve me for field work “on the ice” … will be 70 in mid-2021…  Probably missed my last chance…but still hoping…

At the light of this evidence, we have given the Temporary Byrd Surface Camp  a WAP reference as  WAP USA-45.
We thanks Bob K4MZU and Bert WA1O for their contribution to update WAP WADA Directory.