A very shocked news did reach the Antarctic community. 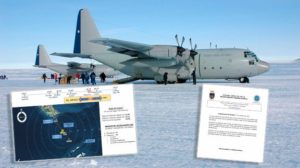 A Chilean C130 with 38 souls aboard, tragically crashes into the Drake Passage halfway from Punta Arenas to the Chilean Eduardo Frei Montalva Antarctic Air Base (WAP CHL-Ø5) on King George Island.

The aircraft took off monday dec. 9th from the southern city of Punta Arenas in Chilean Patagonia at 16:55 local time (19:55 GMT) heading to the main Chilean Base in Antarctica to provide logistical support to that Base.

Drake Passage is a body of water connecting the South Atlantic and South Pacific oceans, and is known for treacherous weather conditions. Local weather was good at the time of the plane’s disappearance and would have had enough fuel to keep airborne until 00:40.

Air Force Gen Francisco Torres said that the search for the plane had “begun immediately” after it had failed to arrive at the military base in Antarctica. Eight planes and four ships are taking part in the search operation. An initial overflight of the area where communication was lost failed to yield any sign of the missing plane. Rescuers are currently searching inside a 60-mile radius from the last point of contact.