The future of Antarctica has been discussed at important Prague conference. For the first time in history, Prague is hosting the Antarctic Treaty Consultative Meeting (ATCM), the annual conference focused on environmental conservation, the impact of tourism and research cooperation on the White Continent.

The event was attended by representatives of 29 countries, which are jointly tasked with taking care of Antarctica. 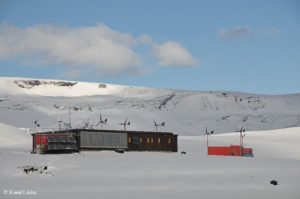 There are several conditions that have to be fulfilled to obtain a so-called consultative status: One of them is sustainable and high-quality Antarctic research; Czech Republic has been running for 13 years already, the Johann Gregor Mendel Station (WAP CZE-NEW) in Antarctica, and it has a valuable and sustainable national, it has asked (via the Ministry of Foreign Affairs) for the consultative status, which was granted to the country in 2014.”

Prague Declaration
“The Prague declaration is to be issued on the occasion of the 60th anniversary of the signing of the Antarctica Treaty Signing. So the states will be confirming their assignment to the original treaty and expressing their will to maintain Antarctica for peace and science.”

What is the value of the Antarctic ecosystem in the age of global environmental change?

-It is absolutely unique. Antarctica, with its location around the South Pole, plays a crucial role in the global climate system. The white color of the Antarctic continent reflects the energy of the Sun, especially during the Austral summer. So it functions like a giant cooler for the whole globe. This is why it is so important to protect it.- said  Pavel Kapler, manager of the Czech Johann Gregor Mendel Station (WAP CZE-NEW) shown on the pic above.

Thanks and credit to: https://www.radio.cz/en/section/curraffrs/future-of-antarctica-discussed-at-important-prague-conference