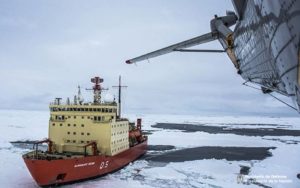 The Argentine Ministry of Defense reports, by the Antarctic joint commander, Marine Commodore Pablo Fal that the crew of the Icebreaker Almirante Irízar rescued five US scientists who were stranded in Antarctica.

Because of the icy conditions of Joinville Island (in the Weddell Sea), the ship waiting for the scientists could not approach the camp to return them back to the Continent. For this reason, the National Science Foundation ( the Antarctic Program of the USA) required the help of the “Irizar” equipped with Sea King helicopters to assist the isolated US professionals and  to rescue them and their camp.

The polar ship, which is doomed to the Antarctic Summer Campaign (CAV) that carries the defense portfolio, acted at the 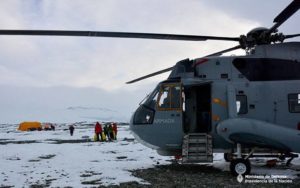 request of the Argentine Foreign Ministry and went to Joinville Island to rescue the scientists.

The assistance was made through four flights with Sea King helicopters in a successful way, and the scientists will be transported during this journey to the US ship Laurence M. Gould.