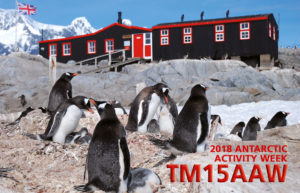 Thanks to F8DVD, always present since the 1st edition of the Antarctic Activity Week, 15 years ago!

He wrote: -15th AAW is over since few weeks. Propagation wasn’t so good but always nice to work so many friends with special call commemorating Antarctic activities-.

Here below a brief description of the subject choice while TM15AAW QSLs are in process of print.

This year, I choose 2 pictures of Port Lockroy base (WAP GBR-Ø1), the British station established in 1944. 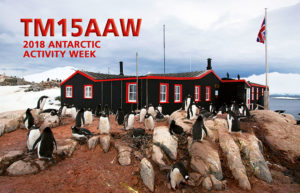 Port Lockroy is situated on Goudier Island in the Palmer Archipelago (64°49’S – 63° 30’W) about 700 miles south of Argentina and Chile. The bay was discovered during Jean-Baptiste Charcot’s French Antarctic expedition in 1904 and was named after Edouard Lockroy, a French politician and Vice President of the Chamber of Deputies, who assisted the explorer in obtaining government funding for his expedition.

The station is small and basic, compared to its modern day counterparts such as Rothera and Halley, but the spectacular mountain scenery, abundant wildlife and historical interest make Port Lockroy WAP GBR-Ø1 well worth a visit.