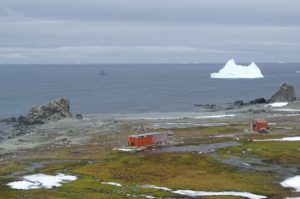 Francisco de Gurruchaga Antarctic Naval Refuge (62°14’03.0″ South, 59°10’02.0″ West), also known as Armonia Refuge or Harmony Haven has been recently referenced with WAP ARG-28 following the activity of Juan Manuel Pereda who did operate from there as LU4CJM/Z from Jan. 8th through 22nd 2017.

The Refuge  is placed in Harmony Point, Nelson Island, South Shetland Island. The administration depends of the Argentine Naval Army. The shelter was built on December 15 of 1954.
This Area was originally designated as Site of Special Scientific Interest No. 14 under Antarctic ATCM Recommendation XIII-8 (1985), after a proposal by Argentina, because this is an excellent example of maritime Antarctic communities of birds and land ecosystems present in the South Shetland Islands, making it possible to carry out long-term research programs without damage or harmful interference.