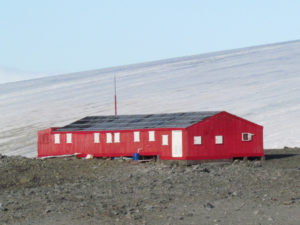 On the hill about 500m from Esperanza is Trinity House, a hut remaining from “Base D”, built by the UK in 1944–45 and closed in 1963. It was transferred to Uruguay in 1997 and is now named Ruperto Elichiribehety Station after the captain of Uruguayan steam trawler Instituto de Pesca No 1, which Shackleton used in his second of three unsuccessful attempts to reach the Elephant Island castaways. The summer-only facility accommodates eight. 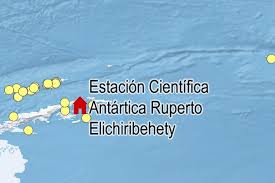 Ruperto Elichiribehety Station (WAP URY-NEW)   is located in Hut Cove, South East of Hope Bay in the North East part of the Antarctic Peninsula (63°24′09″S 56°59′28″W) next to the Argentine Esperanza Base (WAP ARG-Ø4).
The Station can accommodate 7 people, and it is dedicated to support scientific projects in the surrender areas. It was a former British Station D, known as Trinity House.