IceCube can tell the direction of some neutrinos to better than a quarter of a degree. It consists of a billion tons of diamond-clear Antarctic ice about two kilometers deep, monitored by more than 5,000 light detectors. In 2013 it detected the first high-energy neutrinos coming from beyond

our atmosphere. But that breakthrough was not entirely satisfying because those neutrinos had rained in uniformly across the sky: There was no indication of the specific objects that may have emitted them—no “point source.”

This past September IceCube detected a neutrino carrying about 20 times the energy of any particle that could possibly be created by the most powerful man-made accelerators. This meant it had probably come from outer space. 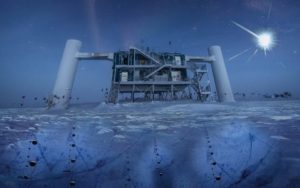 The instrument broadcast an automated alert.

IceCube’s alerts generate a lot of interest among astronomers, because the neutrino represents the third arrow in the quiver of the newborn field of multimessenger astronomy.  Astrophysicists have long dreamed of employing messengers besides light to reveal the inner workings of the many unfathomable wonders in the cosmos. And the dream had come true only one month earlier, when three gravitational wave observatories had detected the merger of two neutron stars and optical telescopes had tied that merger to a gamma-ray burst: a brief flash of the most energetic form of light. No neutrinos were seen, however.