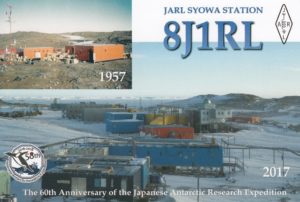 The story of Japan’s involvement in the Antarctic goes back to 1955, when it announced at a special committee on the International Geophysical Year in Brussels that it planned to begin research in the region.

Seventeen members of the Team landed on Ongul Islands. They selected the  place for the Main base for their expedition and named it “Syowa Station”.

Since then, scientific research have been carried out for more than sixty  years involving about 3,400 members so far.

On January 29, 2017, the Japanese research Base “Syōwa Station”  (WAP JPN-Ø3) did celebrate 60 years since its opening.
A sixtieth birthday is a landmark date in the life of any person or institution. Over the course of those six decades, Japan has steadily carried out scientific research in Antarctica, publishing numerous results. These include many new discoveries that no one could have predicted when work began in Antarctica, as well as a number of important clues for predicting the future of the global environment. 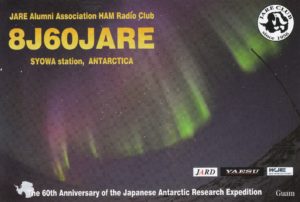 In addition to 8J1RL Yath did operate also with the special callsign “8J6ØJARE“. After a year in Antarctica, now Yath is back home and we just got the QSLs for the contacts made.

Great job Yath, thanks a lot!