Japan’s Dome Fuji Station is located in the Antarctic interior and sits at an altitude of 3,810 meters. As on last  Jan. 29 Japan marked the 60th anniversary of the opening of its first base in Antarctica , its commitment to the southern continent remains solid, with a fifth base planned. 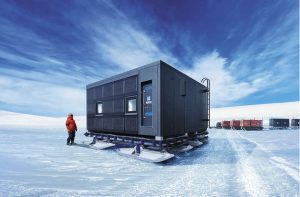 Japan will soon begin working toward construction of a new Antarctic base to continue with research into climate change over the past 1 million years.
Members of the 59th expedition team will select a location for the new research station. Plans call for the start of research after completion of the base in five years’ time.
It will be the first for Japan since the Dome Fuji Station (WAP JPN-Ø4) was opened in 1995. The first base was Syowa Station  (WAP JPN-Ø3) in 1957.  A key research objective of the new base will be to drill deep into the Antarctic ice to bring up ice cores and analyze them to search for answers about climate change.
The new base will be about 1,000 kilometers from the Antarctic coast, in an area where ice sheets are between 2,000 and 3,000 meters thick.
One option under consideration is a portable base that can be more easily assembled and moved into place, practically an  “Antarctica Mobile Station Unit”
Read more at: Japan planning 5th scientific research base at Antarctica | News | Japan Bullet and also: JAXA | A Joint Project of JAXA, NIPR, Misawa Homes, and MHIRD Demonstration Test of Antarctica Mobile Station Unit