There’s  maybe a bit of confusion about the several names of Union Glacier Stations and Camps  in Antarctica. Today we are visiting the Chilean one. 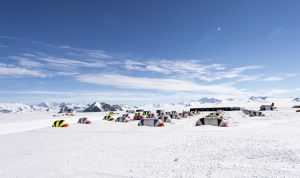 Chile has long had an interest in this part of Antarctica and the Union Glacier Camp (picture aside) has became a Scientific Polar Station jointly operated by the Chilean National Antarctic Institute (INACH) and the Armed Forces who provide logistic support for the Chilean Antarctic programs.

Here is as bit of history: 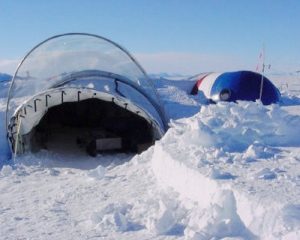 In  2013 during the  68th Chilean Antarctic Campaign (ECA 50), the Polar Stations  Arturo Parodi Alister  (WAP CHL-14) –Picture here on the Right shows the entrance of Arturo Parodi Alister Base –  established at Patriot Hills in 1996, and Antonio Huneeus Gana,  were dismantled. Their equipments moved to the corridors of the future station, the Unión Glacier  joint scientific polar station. 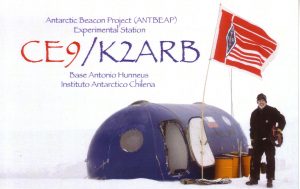 Picture aside is the QSL of Adam K2ARB operating from Antonio Hunneus Gana Station on last 2009).

In November 1997, the first facilities to support scientific research were carried out according to special tents. By Exempt Resolution No. 303 of October 11, 1999, it was officially named Antonio Huneeus Gana Summer Base (aka semi-permanent Antarctic camp) in memory of the Minister of Foreign Affairs of the early twentieth century, who at that time had an outstanding performance in the claim of Chilean sovereignty over the so-called Chilean Antarctic Territory. It was located 1 km from the  private Patriot Hills Base Camp (WAP MNB-Ø2) of the enterprise  Adventure Network International  at  80°18’ 07” South, 81°20’ 39” West .

Next time we’ll see few others on the area trying to under stand their evolution.