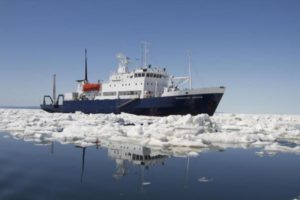 From a message sent (right now) by High Seas Satellite Phone, John Landrigan (K4RXP) said  that KA4RXP/MM  WILL NOT be operational from February 9 to March 8, 2018 due to failure of two relays in auto tune unit.

Attempts to use an alternate tuning means, have been unsuccessful and have introduced radio interference to one of the ship’s radios. John Landrigan sincerely regret that this has happened.
OK John, things like that can happen in an Antarctica cruise, so never mind and don’t worry too much.  Recent canceled 3Y0Z expedition, teaches that there is never certainty in trips to those latitudes! Enjoy the trip and thanks for trying.