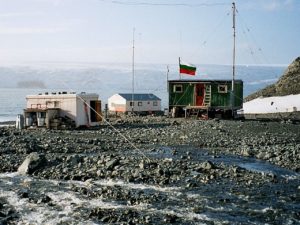 The Lame Dog Hut was erected in April 1988, at 62° 38′ 29″ South, 60° 21′ 53″ West and had been the main building of St. Kliment Ohridski Base until 1998.  It is presently the oldest preserved building on Livingston Island, used as radio shack and post office, and hosting a museum exhibition of associated artefacts from the early Bulgarian science and logistic operations in Antarctica.

Picture aside shows the Bulgarian base in 2003, with Lame Dog Hut on the right, Russian Hut on the left, and the new main building in the background.

The site elevation being between 12 to 15 m above sea level. The site is particularly appropriate for an Antarctic settlement and the existence of the BAB  has a minimum negative impact on local wildlife, for Bulgarian beach has fairly modest population of penguins and seals. At the same time, the base location offers most convenient access to Mount Friesland, Burdick Ridge, Mount Bowles, southern Hurd Peninsula and Varna Peninsula areas .

There is now a proposal for a new Historic Site or Monument (not previously designated as an HSM by the ATCM) for Lame Dog Hut.

Being part of the Bulgarian St. Kliment Ohridski Base (as shown on the pic above), Lame Dog Hut is included in the WAP BGR-Ø1 and a new WAP refence to it  will not be given.