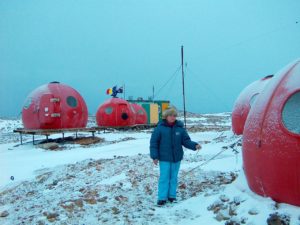 Law-Racoviță Station is placed in a rocky area about 3 kilometers from the Ingrid Christensen coast in Princess Elizabeth Land, in the Larsemann Hills of East Antarctica, at the coordinates 69°23’18.61″ South, 76°22’46.2″ East

Law Base was established in the Larsemann Hills in the 1980’s. It is 3 km inland from the Antarctic coastline and only 2km from the nearby  Progress Russian Antarctic Station (WAP RUS-11).  It is a sumer only base supplied by helicopter from the permanent Davis AAT (WAP AUS-Ø3)

There are a number of nearby lakes which provide a scientific interest.

Tom Maggs told WAP that Law-Racovita is an Australian facility, shared under the terms of a memorandum of understanding (MOU) with Romania. The MOU agrees that for the term of the agreement, Law Base be named Law-Racovita. Australia retains ownership and prime responsibility for the buildings and infrastructure.

WAP is trying to ask the Russian of Progress Base if eventually they can QSY there for a little while and put this new one on the air! Let’s keep our finger crossed!