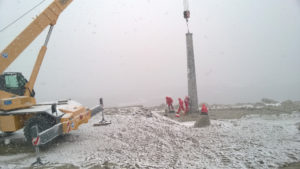 The wind is again the protagonist in Antarctica. Not only as a driving force for the climate “, but also as a driving force of the first wind farm built in the Italian Mario Zucchelli  Station (WAP ITA-Ø1) at Baia Terra Nova, which since 1985 houses the scientific laboratory of PNRA, the National Program of Research in Antarctica, financed from the MIUR (Ministry of Education, University and Research) with the logistic implementation of ENEA (National Agency for New Technologies, Energy and Sustainable Economic Development)  and the scientific coordination of the CNR (National Research Council).

Designed and built by ENEA, this first wind farm will exploit the strong katabatic winds to produce about 63 thousand kWh of electricity per year, with significant environmental and economic benefits thanks to annual savings of at least 24 thousand liters of fuel and almost 80 thousand euros in “bill”.