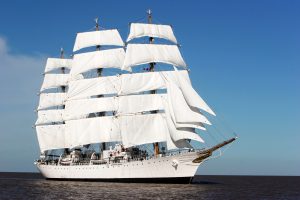 ARA Libertad  is a tall ship which serves as a school ship in the Argentine Navy. She was built in the 1950s at the Rio Santiago shipyards near Buenos Aires, Argentina. Her maiden voyage was in 1962, and she continues to be a school ship with yearly instruction voyages for the graduating naval cadets.

She has just finished (April 2007) undergoing a general overhaul which includes the addition of facilities for female cadets and crew in line with current diversity policies in the Navy and the updating of the engines and navigation technology.

The Directorate of Communications of the Argentine Navy through the Auxiliary Service of Radio Amateurs of the Navy, issue a special free cerificate to the Hams who worked  LU8AEU/MM, Fragata A.R.A Libertad during her training trip “Number 50” in the past year 2022 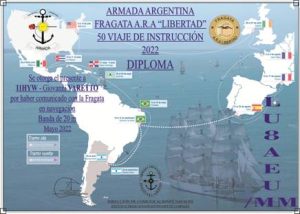 To get the Diploma, which will be sent via e-mail, just go to LU8AEU – Callsign Lookup by QRZ Ham Radio and click the logo (same of this one here below).

You will enter into the form which has to be filled (Callsign, Name and Surname in capitol letters, your email where you wish to receive the Certificate, GMT time,  Band and mode). When you finished, press SEND.  Certificate will shortly come at your mailbox adress.