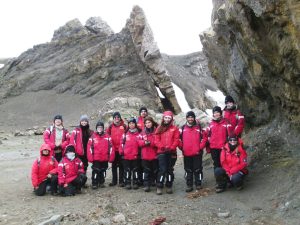 After six days of activities on the White Continent, a new version of the Antarctic School Expedition (EAE) organized by the Chilean Antarctic Institute (INACH) ended successfully. In this instance, the winning students of the XVIII Antarctic School Fair (FAE) participated in the company of their teachers and adult guides, who were able to comply with a scientific program that allowed them to learn about the work of polar researchers.

The group was made up of eight young people (all women) from the communes of Arica, Talagante, Linares, Parral, Constitución and Futaleufú, who were accompanied by four teachers and two adult guides. Between December 13 and 19 they were on King George Island to complete an interesting scientific-pedagogical program prepared by INACH professionals. The operations center was the Professor Julio Escudero base  (WAP CHL-Ø7), where they were received by their chief scientist, the marine biologist Francisco Santa Cruz, and were introduced to the scientists who carry out their research in the sector, in addition to the logistics personnel who were there.

Read more at: An unforgettable experience on the White Continent lived the winning students of the Antarctic School Fair – INACH