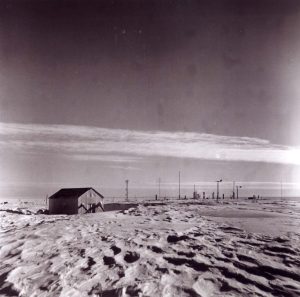 The Maudheim Research Station  (Maudheim , which Norwegian translates as house Maud) was the Base camp of the Swedish-British-Norwegian Antarctic Expedition including members of Australia and Canada between 1949 and 1952 .

At the time of the operation, the Norwegian Polar Institute did announce that, with the permission of King Haakon, the winter base of the joint British-Scandinavian Expedition in the Antarctic has been named Maudheim, in memory of Norway’s late Queen Maud. The name localizes the station as situated in Queen Maud Land. 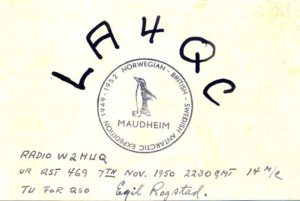 The Maudheim Research Station  was inaugurated on February 20, 1950 at the Ice Barrier Jelbart  in Norsel Bay of Princess Martha Coast , 3 km from the open sea, where a landing was established. The thickness of the ice shelf at the site, was 180-200 m.

The facilities comprised two wooden huts, one of which had lounges, and the other housed the radio station, a meteorological laboratory, and a medical unit. The electric generator, the drilling unit and a serological block were in three small sheds. There was also a magnetic laboratory and a workshop. All the rooms were interconnected by a corridor made of wooden boxes.

On January 15, 1952, the Maudheim Base was abandoned. In 1960 it was visited by a Norwegian Antarctic expedition who observed that it was covered by snow and only a 2-foot-long fragment of the 10-m-high meteorological tower was visible. 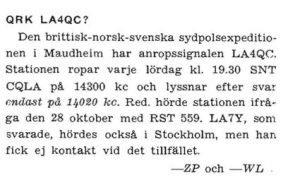 The British-Norwegian-Swedish South Pole expedition in Maudheim has the call sign LA4QC.The station shouts every Saturday at19.30 Swedish time calling  CQ LA on 14300 kc and listens for answers only on 14020 CW.Heard the station in question on 28 October with RST 559. LA7Y, who answered, was also heard in Stockholm, but he did not get in touch at that time.

Thanks to Mehdi F5PFP for showing the rare QSL of LA4QC on Polar DX Group’s page on FacebooK.

At the light of this evidence, WAP has given MNB-16  “New  reference”  to LA4QC at Maudheim Research Station