Observation Hill is a steep 230 m hill adjacent to McMurdo Station (WAP USA-22) in Antarctica and commonly called “Ob Hill” It is frequently climbed to get good viewing points across the continent. Regular clear skies give excellent visibility. But 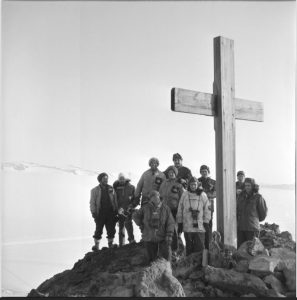 Observation Hill  is also known for being the site where a Cross was erected as memorial to Robert Falcon Scott and his South Pole Party.

In 1972, the cross was declared as one of the initial Historic Sites and Monuments in Antarctica by the Antarctic Treaty signatories, as HSM-20.

Just to breafly retrace the history

After their deaths in early 1912, the last members of Robert Falcon Scott‘s party were found by a search party led by the surgeon Dr. Edward L. Atkinson. The relief party took their photographic film, scientific specimens, and other materials. The bodies of Scott and his men were left in their tent, and later parties could not locate the campsite, since that area had been covered in snow. A century of storms and snow have covered the cairn and tent, which are now encased in the Ross Ice Shelf as it slowly inches towards the Ross Sea. The search party returned to their base camp in McMurdo Sound to await the relief ship.

After it arrived, they worked to build a memorial:  a nine-foot wooden cross, inscribed with the names of the fatal party and the final line of the Alfred Tennyson poem “Ulysses“, which reads “To strive, to seek, to find, and not to yield.”

On 22 January 1913, after a difficult two-day sledge journey, the cross was erected on the summit of Observation Hill, overlooking the camp and facing out towards the “Barrier”,  the Ross Ice Shelf, on which Scott‘s party had died.

The picture above, shows  New Zealanders from Scott Base (WAP NZL-Ø1)grouped around the  Memorial Cross  during the 51 years commemoration (Season1963-1964)