Pobeda Station,  64° 39’ South, 98° 54’ East was a temporary Soviet Research Station opened on May 9th 1960 and closed on August 12 of the same year.  The Soviet Antarctic Expedition was part of the Arctic and Antarctic Research Institute of the Soviet Committee on Antarctic Research of the Academy of Sciences of the USSR. 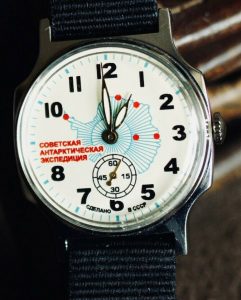 This “brief life” Research site,  was  very singular!  It was set on  Pobeda Ice Island (original Russian name “Oстров Победы”  aka Victory Island) in the Mawson Sea, about 160 km off the coast of Queen Mary Land, East Antarctca.

Today, only a watch recalls the name of this Research Station which was open for only 90 days on an Ice island, practically an Iceberg!

This “Island”, formed by the running aground of a tabular iceberg, exists periodically,  then disappears. The so called “Island” was 70 km long and 36 km wide, with an area of 1,500 km2.

The Soviet Expedition came across Pobeda in 1960 and renamed it as Victory Island to recall the Soviet victory over the Axis powers in the Great Patriotic War.

Pobeda Ice Island  disappeared sometime in the 1970s, to be replaced by a new berg that calved in 1985. That one also disappeared in 2003 or 2004. Currently there is no ice island at this location.

The ice island is created and vanishes periodically. It is created by the calving of an enormous block of ice fromDenman Glacier, located in the eastern part of Shackleton Ice Shelf. The resulting tabular iceberg drifts northwest until it runs aground upon a shoal north of the ice shelf. The iceberg remains locked in this position there for a decade or more, until has remodeled enough to free itself from the shoal.

WAP does not have evidence of Ham radio activity from this very singular temporary Station.