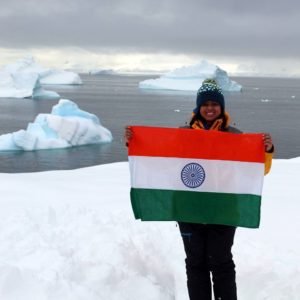 Prathyusha Parakala is the only one from AP and TS to be part of the ClimateForce: Antarctica (CFA) expedition 2018.

HYDERABAD: Scores of Hyderabadis are making the city proud by trekking to Antarctica. Prathyusha Parakala is the latest trailblazer from the city, who was among the 90 global climate force ambassadors selected to create awareness about climate change.
“Until last year, there were spots in Antarctica where humans could not reach as it was covered with thick ice. This year, we could do so. This was after climate change, which led to melting of ice,” said Parakala, who was felicitated for her achievement by Telangana chief minister K. Chandrasekhar Rao with the ‘Visisht Puraskar’ on Formation Day.
Parakala is not the only one to have made it to the group of  ambassadors. Apart from this, city-based entrepreneur and engineer Vijay Raghav Varada was also selected to fly to Antarctica to evaluate performance of his innovation, a 3D printable vertical wind turbine that generates energy.
In 2016, Thammala Sandhya, a mother of two, was among many explorers from across the world to be a part of the International Antarctic Expedition. In January 2018, doing away with a comfortable job in an e-commerce firm, Sunil Kumar, a city-based chartered accountant took part in the expedition

This was the last year that the two-week expedition to Antarctica was hosted by reputed environmentalist Robert Swan.