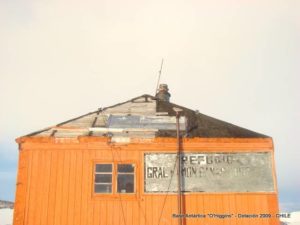 View Point was the location of the British research Station “V”. It was active intermittently with the intention of searching in the survey, meteorology and geology. Located on Duse Bay, Trinity Peninsula, at 63° 32′ 15″ South 57° 24′ 15″ West,  the site was selected on 8 Feb 1953, foundations of first hut laid 3 June 1953. A second hut was erected on 20 Mar 1956 and called Seal-catcher’s Arms or View Point Hut ,
Station “V” was erected as a satellite base for  Hope Bay Station  “D”  WAP GBR-Ø4 (ceded to Uruguay in 1997 which renamed it  Base Lieutenant Ruperto Elichiribehety  WAP URY-NEW). 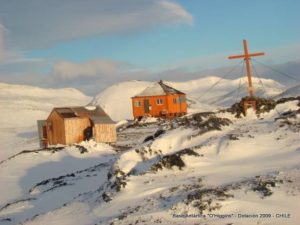 The refuge consists of a cabin enabled as a room and a second machine house, bathroom and storage. It is located about 50 km away from the Chilean base General Bernardo O’Higgins (WAP CHL-Ø2), on which it depends.

Currently the installation is regularly maintained by Chile, for use as an emergency shelter, allowing 8 people to survive in it for 20 days in the event of an accident. For this purpose, the station has an electric generator, as well as fuel, food, water and gas.

For full listing of all station histories, see: History of British stations and refuges.