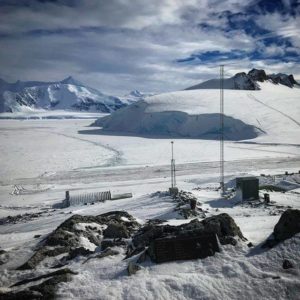 Rothera Station (WAP GBR-12) 67° 34’ Ø3” South, 68° Ø7’ 47” East,  is the BAS logistics centre for theAntarctic and home to well-equipped biological laboratories and facilities for a wide range of research. The station is situated on a rock and raised beach promontory at the southern extremity of Wormald Ice Piedmont, South-Eastern Adelaide Island.

Rothera Station was established in 1975 to replace Adelaide station (1961-1977) where the skiway had deteriorated.

October 2018: The Runway at Rothera Station (Lat: 67° 34’ 3” South, Lon: 68° 7’ 39” East)   has finally been cleared of snow in readiness for the first aircraft of the season. The view west towards the mountains of Adelaide Island, and Ryder Bay covered with sea ice.
Photo: Jess Walkup

The link below, will lead the readers  through the Airfields in Antarctica: