In 2006, NASA launched a probe on Antarctica to measure the cosmic radiation that falls on our planet. The probe soon began to detect these particles, but there was something very rare in a percentage of them: they came from below, from the ice of Antarctica. 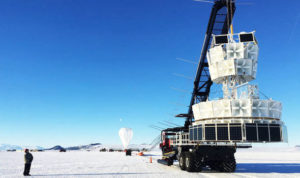 Last week, a team of physicists from the Pennsylvania State University did publish an interesting theory about the origin of that cosmic radiation that seems to be originated in our own planet. If that theory proves to be true, what emits the ice of Antarctica is a new type of particle that goes completely out of the current standard model of physics and would demonstrate the validity of the supersymmetry model.

The pic aside (Photo and credit to: NASA), show the ANITA Probe. Cosmic rays were observed shooting from Antarctica by the high-tech ANITA balloon