Russia has provided a full details of its 64th RAE and we are happy to share it on the WAP pages , sure that the Antarctic chasers will enjoy to know the plan; in addition, being us Radioamateurs, we are sure we will have good chance to work the skilled Radio operators  in the several Russian Bases while they will be there. 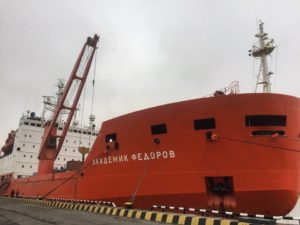 The scientific expedition ship Akademik Fedorov has just departed from St. Petersburg to the shores of the Antarctic. This will be the 43rd expeditionary flight of the flagship of the Russian polar fleet. The ship’s captain is Oleg Kalmykov Kalmykov, the head of the seasonal expedition is Mikhail Viktorovich Bugayov.

On board the ship, 100 participants of the 64th RAE will go to Antarctica: 61 people from the wintering staff of Mirny (WAP RUS-Ø7), Vostok (WAP RUS-13) and Progress stations (WAP RUS-11), 39 participants of seasonal work at these stations, as well as seasonal field bases Molodezhnaya (WAP RUS-Ø8) and Oasis Banger and the R/V “Akademik Fedorov”.

To ensure the year-round operation of the Antarctic stations and the implementation of scientific programs of the seasonal expedition, more than 1,200 tons of various cargoes were loaded on board, including 852 tons of diesel fuel, 67 tons of food, consumables, spare parts, scientific instruments and equipment. 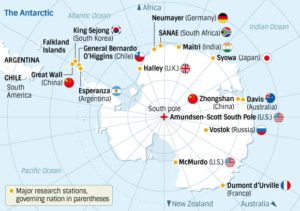 The voyage will last 207 days and will consist of two Antarctic phases, each of which will begin in the port of Cape Town.

At the first stage, the vessel will ensure the start of seasonal work at the Molodezhnaya Base, at Progress and Mirny stations. Then “Akademik Fedorov” will deliver personnel and supplies for Vostok station, ensure the implementation of geological and geophysical works in the Oasis of Banger and oceanographic works in the waters of the Mawson Sea and Prydz Bay. Along the way, the ship will deliver personnel and cargoes to the seasonal base of the Belarusian  and cargo to the Belgian seasonal base Princess Elizabeth on the coast of the Riiser-Larsen Sea.

The first stage will be completed in mid-March in the port of Cape Town, where participants of the wintering team at Novolazarevskaya and Bellingshausen stations will arrive on scheduled flights.
The second stage of the Antarctic cruise of the vessel will take place along the route: Cape Town – Molodezhnaya (WAP 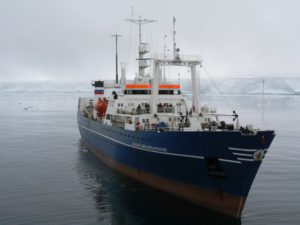 RUS-Ø8), Novolazarevskaya (WAP RUS-Ø9), Bellingsgausen (WAP RUS-Ø1),  Montevideo – Bremerhaven – St. Petersburg. At this stage, the vessel will supply and replace the wintering team at Novolazarevskaya and Bellingshausen stations, as well as complete seasonal operations at these stations and seasonal bases Molodezhnaya and Vechernyaya Mountain (WAP BLR-NEW). At the exit from the Antarctic, the vessel will conduct marine research in the Bransfield and Drake Straits. The return of the “Akademik Fedorov” to the home port is planned for June 2, 2019.

In total, the staff of the 64th RAE will include 120 employees of the seasonal expedition, 110 people of the wintering expedition, two ships: the R/V “Akademik Fedorov” (Pic above) and the R/V “Akademik Alexander Karpinsky” (Pic aside), two helicopters of the type KA-32 and the An-2 aircraft.
WAP wish the polar explorers good luck in the expedition!