For 13 months after breaking away from the White Continent’s long peninsula, the trillion-tonne block did little more than shuffle back and forth on the spot. 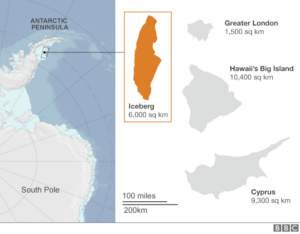 But now its southern end has swung round almost 90 degrees, indicating the berg has been caught in ocean currents.

“After more than a year of moving to and from near its parent ice shelf, iceberg A-68, which calved from the Larsen C Ice Shelf on 12 july 2017, has finally escaped,” commented Prof. Adrian Luckman from Swamsea University, UK.

Until recently, the iceberg was hemmed in by dense sea-ice in the east and shallow waters in the north.  Now, a strong foehn wind blowing eastwards off the ice shelf in early September has pushed the southerly end of the iceberg out into the Weddell Gyre. This persistent clockwise drift of ocean waters and floating sea-ice flowing north past the Larsen Ice Shelf has rotated A-68 out into the Weddell Sea.

“Here, it is much more free to begin moving away and be carried further north into warmer waters.”