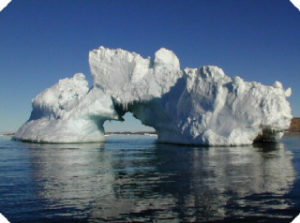 What do you do if you’re a fast-growing city in the desert with lots of thirsty people and little freshwater reserves? Park an iceberg off the coast.

The National Advisor Bureau (NABL), a private engineering firm, wants to schlep a glacial iceberg from Antarctica – weighing approximately 100 million tons – to Dubai, via an intermediate stop in either Perth, Australia, or Cape Town, South Africa.

If the iceberg doesn’t melt along the way, the firm will sell the water to Dubai’s government.

If we succeed with this project, it could solve one of the world’s biggest problems – Abdulla Alshehi, NABL’s founder told NBC News- So if we can show this is viable, it could ultimately help not only the UAE, but all humanity.

Reed more  and watch a video at: