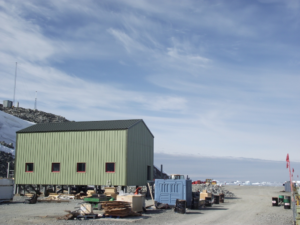 Dutch Ministry of Education, Culture and Science took the decision in 2010 to make the sum of six million euro available for research in Antarctica. On Sunday 27 January 2013, the Netherlands Organization for Scientific Research (NWO)

opened the first Dutch Laboratory in Antarctica and it  has been placed near the British Rothera Research Station.

The lab is named after the sixteenth-century Dutch merchant, Dirck Gerritsz, probably the discoverer of Antarctica. The Dirck Gerritsz Laboratory (WAP NLD–NEW) consists of four sea containers that have been converted into laboratories and placed in a docking station.

In the laboratory Dutch scientists carry out research into Algae, Traces of iron in the warming Antarctic seawater, Freshwater flow 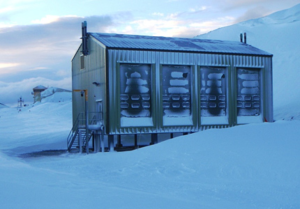 and climate change on the Antarctic Peninsula, study the  influence of glacier melt water on marine microbial communities in Ryder Bay and  Greenhouse gases.

The Netherlands is a signatory to the Antarctic Treaty and this is the reason behind the Netherlands’ Polar research program.

The South Pole is a unique research environment where the consequences of climate change can be measured in detail, without any human disruptions. The first five research projects did start at the Dirck Gerritsz Laboratory in the Antarctic summer of 2012-2013. 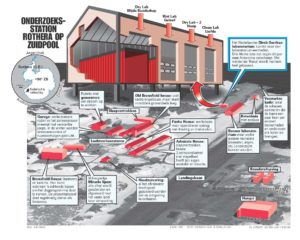 As soon as some Hams will be active HF from there, a WAP reference will be issue.