Nestled at the southern tip of Ross Island, just off the Antarctic coast, lies one of the most remote towns in the world. McMurdo Station (WAP USA-22)  is the main U.S. outpost in Antarctica, built on an outcropping of rugged volcanic rock. 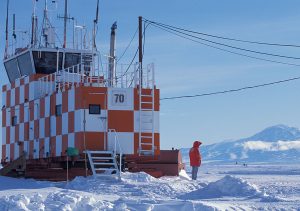 McMurdo Station has no permanent residents — just a revolving door of visiting scientists and temporary personnel, some of whom live there for up to a year at a time. At its most populous, typically during the summer, it houses about 1,000 people.

Their only connection to the outside world comes in the form of satellite systems, which provide limited and fragile access to the internet. That means hundreds of people share a slow and intermittent internet connection.

Now, scientists hope to bring Antarctica into the 21st century. They’re pushing for a fiber optic cable — the fastest form of internet technology — that would extend from New Zealand or Australia all the way down to McMurdo Station.

The idea has been floating around for years, according to Peter Neff, a glaciologist at the University of Minnesota. But it’s recently begun to gain traction again.

The National Science Foundation sponsored a three-day workshop last month to examine the value such a cable could bring to Antarctica. The workshop featured speakers from research institutions across the U.S., as well as New Zealand and Australia.