Many Antarctic Research Stations, support satellite field camps which are, in general, seasonal camps. The type of field camp 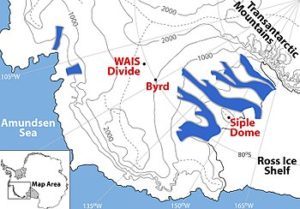 can vary;  some are permanent structures used during the annual Antarctic summer, whereas others are little more than tents used to support short term activities. Field camps are used for many things, from logistics (Sky Blu,  WAP GBR-NEW) to dedicated scientific research such as WAIS Divide Field Camp, WAP USA-34 located at 79° 28′ 03″ South, 112° 05′ 11″ West.

The site preparation for this Field Camp,  started in the 2005/2006 season with the construction of the skiway, and a steel arch shelter for drilling and core processing. Camp logistics was provided by Raytheon Polar Service Company and the air transport by the New York Air national Guard using LC-130 aircraft. 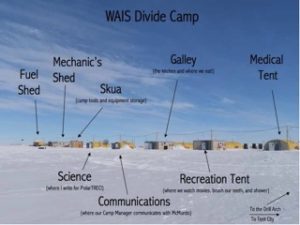 The deep coring started in the 2006/2007 season using the Deep Ice Sheet Coring (DISC) drill developed and operated by the Ice Drilling Design and Operations group at the University of Wisconsin, Madison. The coring was stopped in December 2011 at a depth of 3,405 m, which is ~ 50 m above the bottom of the ice sheet. The last 50 m of ice was left in place to provide a barrier between the borehole and the pristine aqueous basal environment. The ice at the bottom of the hole fell as snow 67,748 years ago. In the 2012-2013 season additional core was collected in zones of high scientific interest.

The only Ham radio activity so far, from this location was made by Steve Polishinski WB9YSD who did sign KC4/WB9YSD. There is a very interesting web page http://www.wb9ysd.org/ where Steve explains the operation and the job at WAIS (West Antarctic Ice Sheet) field camp. After his operation on January 2010, WAP did issue a new reference number as WAP USA-34.

So far QSLs have not been issued and the Antarctic chasers are still waiting.

We take the opportunity to send Steve a prayer … the saying goes, “the final courtesy of a QSO is the QSL card”.