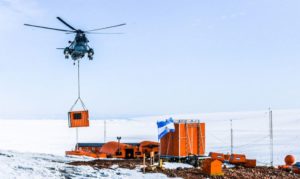 Located 1,300 km from the South Pole, it has months of complete sunlight and other months of dark polar night, with strong winds and temperatures that reach up to -54˚C.

The peculiarities of this Base make it a privileged scenario for numerous scientific studies, mainly of ozone, magnetism, meteorology, glaciology, terrestrial biology, geodesy and seismology.

During periods of darkness, the latitude of the base also allows the study of the famous northern lights, of great interest to science.