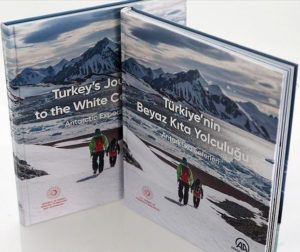 Anadolu Agency has published a bilingual book on Turkey’s Antarctic expedition.
In Turkish and English, the book  titled Turkey’s Journey to the White Continent: Antarctic Expeditions, details Turkish expeditions in Antarctica, work carried out by Turkish Teams and the country’s objectives for the continent.
Covering setting up of Turkey’s meteorological observation station, and the team’s scientific efforts in Antarctica, the book is now on sale in bookstores and online.
The book also covers an internationally renowned Turkish diver Sahika Ercumen’s diving in the Southern Ocean where the world’s oceans meet surrounding Antarctica.
Meanwhile, the book includes Anadolu Agency correspondents’ impressions of the continent, and photos taken during Turkey’s 3rd national scientific expedition to Antarctica, Anadolu Agency Director-General Senol Kazanci said.
In February 2019, a Turkish team traveled to Antarctica as part of the 3rd National Antarctic Science Expedition to spend 30 days, which was supported by the Turkish Presidency, the Industry and Technology Ministry, and ITU’s Polar Research Center, along with other Turkish universities.
Read more at:  https://www.aa.com.tr/en/corporate-news/anadolu-agency-releases-book-on-antarctic-expedition/1721876