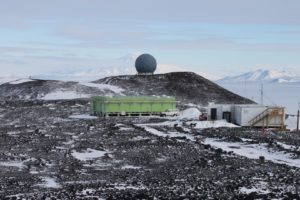 The new science season at Antarctica is just a few days away from opening and NIWA researchers are busy packing containers and shipping them to the ice where they will be reunited with them in the coming months.

(NIWA stands for  National Institute of Water and Atmospheric Research and it’s   a Crown Research Institute of New Zealand. Established in 1992. It conducts commercial and non-commercial research across a broad range of disciplines in the environmental sciences)..

The summer science season lasts for about five months, and 10 NIWA staff will be heading south over that time, with the first due there in early October to work at Arrival Heights, NIWA’s atmospheric research station (WAP NZL-NEW) about six kilometers from Scott Base (WAP NZL-Ø1),  Latitude 77° 49′ Ø1″ South , Longitude 166° 25′ ØØ” East  Elevation 184 m asl

Principal atmospheric technician Dan Smale will be carrying out specialized annual maintenance and calibration on the equipment which makes important measurements of greenhouse gases and trace gases such as ozone.
Mr Smale will also train two new technicians to run and maintain the instruments. One will be based on the ice for summer, while the other will remain for a full year. Later in the season atmospheric technicians Gordon Brailsford and Mike Kotkamp will also go to Arrival Heights for further maintenance and replacement of specialized parts.
Read more at:
http://www.scoop.co.nz/stories/SC1809/S00038/busy-season-for-niwa-scientists-in-antarctica.htm