A fortnight after the 21 June, 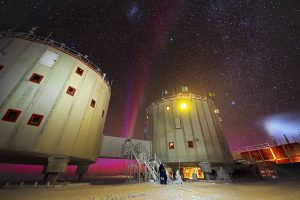 winter solstice in Antarctica, the crew at Concordia Research Station (WAP MNB-Ø3) are slowly welcoming the return of sunlight.

The 12-member crew at Concordia, located at the mountain plateau called Dome C, have spent the last few months in complete darkness: the sun disappeared in May and will not be fully visible again until mid-August.

Confined in extreme conditions, the crew at Concordia – one of three Antarctic stations inhabited all year long – find solace in traditions. Midwinter often includes well wishes from other Antarctic and sub-Antarctic stations as well as communal projects. The crew this year brewed their own beer to mark the occasion.

As well as offering around nine months of complete isolation, Concordia’s location at 3233 m altitude means the crew experience chronic hypobaric hypoxia – lack of oxygen in the brain. Temperatures can drop to –80°C in the winter, with a yearly average of –50°C.

As a station set in Earth’s harshest space, Concordia is an ideal stand-in for studying the human psychological and physiological effects of extreme cold, isolation and darkness.

Follow the adventures at Concordia on the Chronicles from Concordia blog.