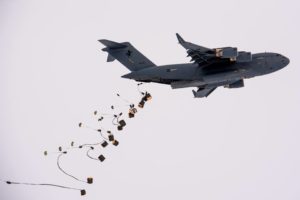 In a first for the Australian Antarctic Program, nine tonnes of cargo was parachuted from the back of a Royal Australian Airforce C-17A Globemaster III and on to the sea ice near Davis Research Station (WAP AUS-Ø3) on Sept.20-2017

The C-17A was refuelled by a KC-30A Multi-Role Tanker Transport – high above the Southern Ocean – half-way through the 10,000km round trip mission.

The cargo was predominately food based, including fresh lemons and carrots, and also included medical supplies and telecommunications equipment. 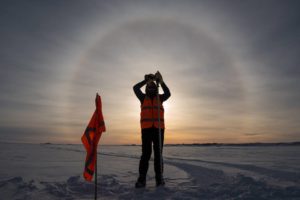 The pallets were ripped by the Australian Army’s 176 Air Dispatch Squadron.

photos were captured from the sea ice by Barry Becker.

Source: http://www.antarctica.gov.au/news/2017/mid-air-refuel-extends-reach-of-australian-antarctic-program#v208710
There is a nice video at the bottom of the article, don’t  miss it!

Other videos provided by Australian Antarctic Division are available here: