It was established in 1944 and operated as a British Research Station until it closed in 1962. The abandoned Base was designated a Historic Site and Monument under the Antarctic Treaty and in 1996 restored as a  “living’ museum”. 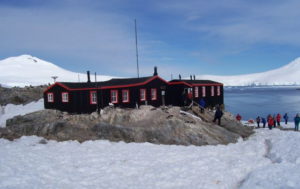 Base A now welcomes visitors to the site every Austral summer, in order to promote the work of the UKAHT on the Peninsula and in the UK and to give visitors a taste of base life from the early days of British occupation.

It is visited each Austral summer by approximately 18,000 ship-borne visitors, amounting to one to two ship visits per day.

In the photos you can see the three buildings at Port Lockroy: Bransfield House, the Boat Shed and the Nissen Hut. In the distance you can also see the anemometer tower as well as the antenna mast (in 1957 Port Lockroy used to have eight antenna masts which were used for high frequency radio communication).