Westarctica, formally known as the Grand Duchy of Westarctica and previously known as the Protectorate of Westarctica and the Achaean Territory of Antarctica, is a micronation situated primarily in the western portion of the continent of Antarctica and including all territory south of 60°S latitude and between 90° and 150°W longitude, without exception. It also includes the previously claimed territories of Peter 1st Island (claimed by Norway) and the Balleny Islands (claimed by New Zealand) as well as the colony of Calsahara (See Colony of Calsahara – MicroWiki (micronations.wiki). 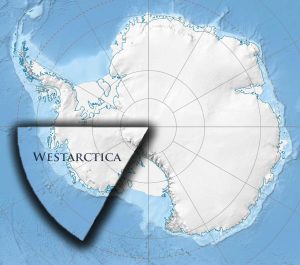 In 2001 Travis McHenry laid claim to the largest contiguous portion of the nation by filing a claimant letter with the nine world governments that have also expressed legal claims of ownership to portions of the continent (though none to the sector claimed by McHenry). The territory consists mostly of Marie Byrd Land and a large proportion of Ellsworth Land. It has no year round residents, although seasonal Research Stations are located in the region. The nation of Westarctica was founded through a loophole in the Antarctic Treaty. (Source: Westarctica – Encyclopedia Westarctica )

On November 2, the Westarctica micronation celebrates the twenty years that have passed since the day when the then 21-year-old Travis McHenry decided to found it by claiming an uninhabited territory of over one and a half million square kilometers in West Antarctica. That is five times the surface of Italy, and therefore not so much micronation, even if it is defined and defined in this way as a sovereign project of a few people not recognized by other Countries.

Westarctica micro-Nation is a place where McHenry has never been, however, and does not even intend to visit: the twentieth anniversary will in fact be celebrated by his home in the United States, from which he plans to wave the flag of his micronation, on which he has a cross. white on a blue background, with a white crown in the upper left quadrant.

In some of its features, Westarctica still continues to be a slightly goliardic micronation, as it was largely in its early years.