The crew of the M/V Arctic Sunrise, an icebreaker vessel owned by Greenpeace, were sailing through Antarctica’s Weddell Sea this month when they saw something they didn’t expect.

“One of the scientists on board, Alex Borowicz  was looking through the binoculars from the bridge of our ship” Louisa Casson, an ocean campaigner with Greenpeace UK currently on board the Arctic Sunrise, told Mongabay in a video interview. “He spotted what he thought looked like a penguin colony, where we had seen no previous records.”

As the ship drew near, the crew discovered a colony of gentoo penguins (Pygoscelis papua) consisting of about 75 chicks living on Andersson Island on the east side of the Antarctic Peninsula, previously 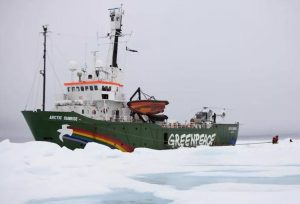 unknown to science. Scientists say this is the furthest south the species has ever been seen in this part of Antarctica, and posit their presence here to the impacts of climate change.

R/V Arctic Sunrise is an ice-strengthened vessel operated by Greenpeace. The vessel was built in Norway in 1975 and has a gross tonnage of 949, a length of 50.5 metres (166 ft) and a maximum speed of 13 knots (24 km/h; 15 mph). Under the original name of Polarbjørn (“Polar bear”), she was used as a sealing ship. The vessel was subsequently used by the French government. Greenpeace purchased the ship in 1995.