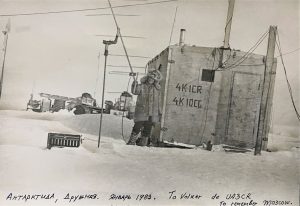 Thanks to our friend Volker DL8JDX, for this rare and old picture.  A personal gift from Leonid Labutin UA3CR (SK 1998).

Volker DL8JDX, wrote:
«This is not a QSL card but a picture from 4K1CR from Druzhnaya 1 Base from 1983 showing him doing experiments with RS Satellites.  He handed this photo to me during a visit from me in Moscow 1985.  In that time I didn´t even know that I would be staying in Antarctica myself three years later … » 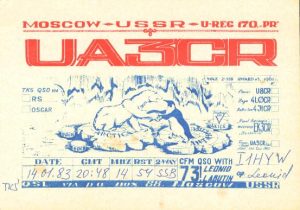 1982-1983. Expedition to Antarctica with Malakhov, Shishkarev, Redkin and Leonid Labutin. Active work on board ships. Visiting radio amateurs in the Canary Islands, Brazil, Uruguay. Work with Druzhnaya Base (WAP RUS-Ø2) in Antarctica through RS’s using on-board Morse BBS. Many radiograms were transmitted and received, recorded in onboard memory. Thus, the possibility and expediency of using digital methods of communication via low-flying satellites in amateur radio lines between antipode points was proved. Tests were conducted on communications via satellites in VHF-FM mode and by teletype with Molodezhnaya (WAP RUS-Ø8) and Leningradskaya (WAP RUS-Ø6) stations. Flights to the South Pole, and a 10-day mini-expedition to the Dufek mountain range. Study of conditions of SW radio waves passage and satellite signals reception. Conducted research on using antennas on snow and detecting warehouses marked with radio beacons. Learned conditions for living and operating radio equipment in a cabin deep under the snow. After returning, extensive reports were made, including a publication in the RADIO magazine. An amateur radio station UK3KP was opened at Komsomolskaya Pravda. At a full-time KV contest in Kaunas, the idea of a contest through the ISZ was born.