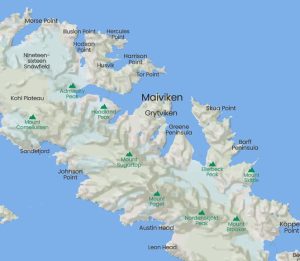 WAP is working continuously to list and register the so many huts and refuges scattered around the coasts of  Antarctica and its  Sub Antarctic islands.

To enter onto WAP-WADA Directory we normally need a picture, latitude and longitude and a bit of description to qualify the “New Entry”.

Today Thanks to Gabry IK1NEG, we have found all what is necessary to add Maiviken Hut on WAP-WADA.

Maiviken is a locality in South Georgia Islands, situated nearby to George Rock, and close to Rocky Point. Maiviken Hut takes his name from this place. 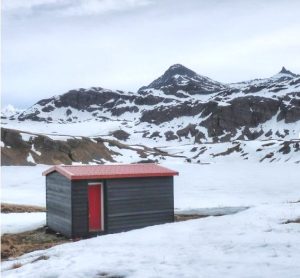 Maiviken Hut located at 54°14’52” South, 34°30’23” West , next to Maivatn lake, in the Bore Valley. Next to the lake lays this cozy little hut built in 1974 and kept in good conditions, being normally used by King Edward Point scientists. It was a quite precarious shelter in the past but is getting recently renovated.. At the present times Maiviken is often visited by scientist from King Edward Point for research purposes, mostly surveying Fur seal population and Gentoo penguins nesting at Tortula Cove.