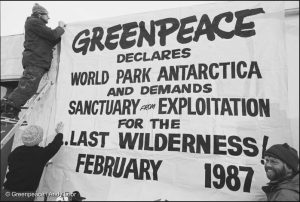 World Park Base was a non-governmental year-round Antarctic Base located at Cape Evans on Ross Island Antarctica.

Greenpeace established that small base at Cape Evans on Ross Island (77° 38’ South, 166° 24’East) in the southern (austral) summer of 1986/87. Named World Park Base, it was to be the focal point of future campaigning activities, providing a “watchdog” presence in the Antarctic. During its existence, it enabled Greenpeace to gain first hand experience of operating a base on the Continent and to monitor and publicise the activities of other nearby stations. 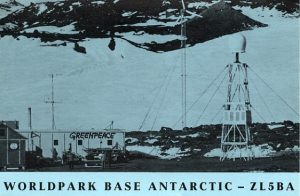 The main Bbase building was constructed in 1987 from prefabricated units, which were designed and manufactured by a German polar construction and engineering company. Between 1988 and 1990 several structures were added. Eventually, basebuildings consisted of an L-shaped main building and a small food storage and emergency building.  The main building comprised an accommodation unit housing a common living area, four separate bedrooms, a bathroom, radio room, medical and science room, coat room and a room containing snow melting equipment. A cold porch was also attached. The engine room was housed in the same building, separated from theother facilities by a walkway. A lean-to was used for storage. The short side of the L-shaped building was formed by another unit joined to the main building by a walkway which housed a workshop, science lab, dark room and field equipment store. The latter unit, called the FOS hut, had been acquired from the Footsteps of Scott Expedition which had previously had a base at the site. 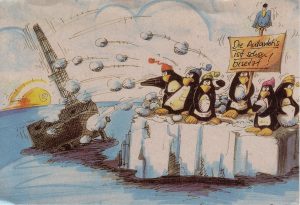 The original base was designed to accommodate four persons. In later years, a workshop and laboratory building and two more bedrooms were prefabricated and added to the original structure as it became apparent that extra space was needed for the wintering teams. These additions were simple to construct andinstall, with minimum excavation necessary.  Also installed on the base was amateur radio equipment for contact with Ham radio enthusiasts worldwide, and a Uosat satellite link that was part of a scientific project run in conjunction with the University of Sussex in the United Kingdom.