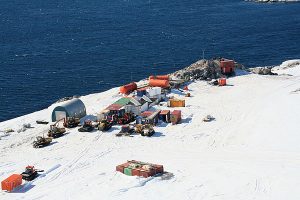 This small Base that serving as a relay point for crossings to the Concordia Station (WAP MNB-Ø3) was established in the early 1990’s in Antarctica, close to the sea and at about 5 km far from Dumont d’Urville Station (WAP FRA-Ø1). It is the point of departure of the traverses to Concordia station. There is no ice free area around the station nor protected area in the immediate vicinity, as well as no fauna and flora. The Station is built on a rock near the coast but its surroundings are entirely covered by ice or snow. 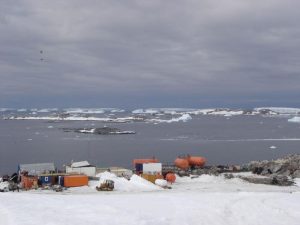 The joint French-Italian Station Robert Guillard-Cape Prud’homme (WAP MNB-NEW) forms an integral part of the Concordia project. It offers a gateway to Concordia for the transport of heavy tools and equipment, following delivery by the resupply vessel L’Astrolabe to Dumont d’Urville Station. In this context, and because Dumont d’Urville station is not on the continent itself, Cap Prud’homme was established for the development and maintenance of the traverse equipment (tractors, trailers, accommodation caravans), its winter storage, and preparation of transport convoys. The site was selected because it was used from 1955 as Antarctica Gateway for French expeditions.

Few scientific activities are conducted at Cap Prud’homme Station, except some glaciological studies of the Astrolabe Glacier. Since 2012, scientific traverses have been developed for pure scientific purposes.

he station is open in summer only. The staff is mainly composed of technicians working on the maintenance of the traverse equipment, as well as drivers in charge of the 3 convoys per year.