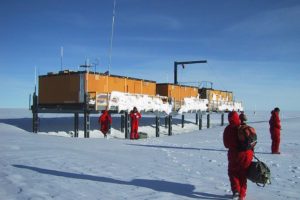 Felix Riess, DL5XL, is actually signing DP1POL/P from Kohnen Station (WAP DEU-11), Antarctica. The time of Felix stay at Kohnen is not known. QSL via DL1ZBO

Kohnen (75° South, 04° East) is a German summer polar research station in the Antarctic; it is named after the geophysicist Heinz Kohnen (1938–1997), who was for a long time the head of logistics at the Alfred Wegener Institute. 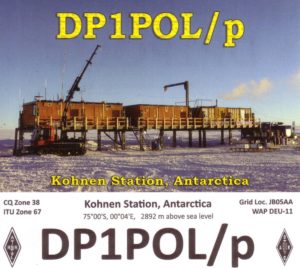 The station can accommodate up to 20 researchers at a time, and the personnel constantly change with each new research project.

The scientists work and live in the eleven containers, each of which rests atop steel struts above the surface of the ice.

Some of these containers were salvaged from the Filchner Station, which had to be dug out of the ice in 1999. Some contain living quarters, a kitchen and mess hall, while others are home to the radio station, a snow-melting machine for drinking water, and the station’s power supply (100 kW).