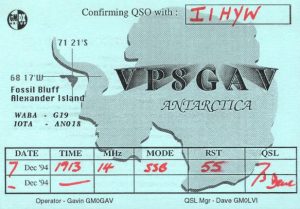 Gavin Taylor  is a well known Antarctic veteran. The Old Timers should certainly recall when  from 1990 through 1995 he was in Antarctica  working for British Antarctic Survey . At that time Gavin was signing  VP8GAV. Sure many of us still have his QSL card, kept among  the best memories of the time been!

VP8GAV was active from  Faraday Base (WAP GBR-Ø6), Fossil Bluff (WAP GBR-1Ø), Rothera Base (WAP GBR-12),  Bird Island Station (WAP GBR-23), from Stanley is the Falklands  (WAP GBR-25) ,  and  let’s  say that what we have worked 30 years ago from Antarctica,  is something that will not get back.  Now,  in the era of internet, cellphones, Whatsapp , Istagram and Facebook, the “modern” Hams are loosing the magic time when we  nights and days  spent to follow the Hams  in Antartica,  waiting when,  in their free time,  they could operate  mostly in difficult situation  to give anyone a chance to log rare spots from the Icy Continent! 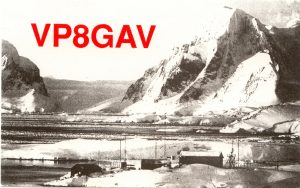 Well, now Gavin Taylor is back and will be “On the Air” in the month of december 2021 as GB6ØANT,  referenced as  WAP-337, joining the 6Ø Anniversary of the Antarctic Treaty Signature.

Don’t miss him on the air … you will work a great Antarctic Veteran!