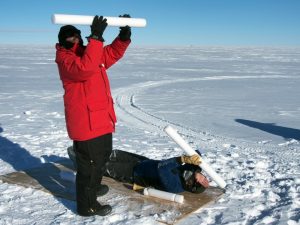 While analysing ice core samples taken from James Ross Island in Antarctica, scientists from the British Antarctic Survey noticed something unexpected – the levels of black carbon or soot, began to increase drammatically about 700 years ago..

Black carbon is a part of the fine particulate air pollution that contributes to climate change. It is one of many particles that are emitted by the burning of diesel, coal, or by biomass burning such as forest fires.

The team analysed the ice core taken from James Ross Island and compared it to several others taken from across continental Antarctica. While the ice core from James Ross Island showed a notable increase in black carbon starting in the year 1300 and tripling over the next 700 years, black carbon levels across continental Antarctica stayed relatively stable.

Thanks and credit to: BAS & BCC Science Focus magazine