Danilo Collino IZ1KHY did arrive at MZS  a week ago, among the crew of technicians , logistic s and scientists. They have re-opened the Italian Base  (WAP ITA-Ø1) which is now full of activity, with a ot of  air traffic coming from New Zealand. The  37th Italian Antarctic Expedition has now officially started. 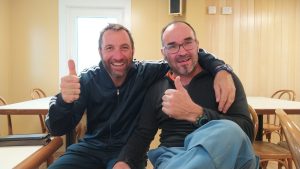 Well, Danilo IZ1KHY and David F4FKT  (see pic aside) met each other at Mario Zucchelli Station (WAP ITA-Ø1). Great rendez vous and now let’s hope they can be on the air … propagation permitting!

Just yesterday, Mehdi, F5PFP sent a post saying that a few weeks ago, David  (now F4FKT) a local friend passed the HF amateur radio licence examination and is going to be  operating from Antarctica. He is a regular member of the French Polar Institute expeditions as multi skilled employee (carpenter-woodworker, boilemaker-welder, driver-mechanical).

I gave him the power supply, the fiber glass mast, the 20&40m wire antenna i used as FT5YJ,FT5YK,VP8DLM,CE9XX. Eric F5SIH (ex FT5ZH) provided a mono 20m mobile vertical whip and its magnetic baseplate. 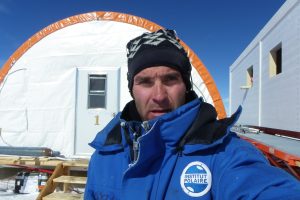 A FTxYx licence is pending , if not issued in time, David can alternatively and legally operates as FT/F4FKT/P or IA/F4FKT/P (F4FKT in the pic aside)

We have just been informed by Mehdi,  that David F4FKT has just received his call as FT4YM so he will operate from November 2021 to February-March 2022 with his Antarctic callsign!

Possible QTH could be:

1-Qrv from Mario Zucchelli for a few days

2-Qrv from Concordia (aka Dome C) as main base

3-Qrv from Little Dome C (50km from Concordia) for a 2 weeks stay at least. 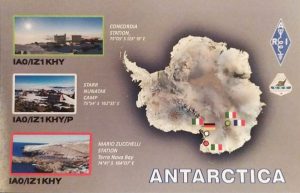 Possibly, according to how the programme evolves:

4-Qrv from Cape Prud’homme for a few days

5-Qrv from Dumont d’Urville for a few days

Danilo IZ1KHY (QSL here aside) will be also  for 1 month at Concordia Station and probably, also down there IZ1KHY & F4FKT will jointly operate from WAP MNB-Ø3.

Well, Danilo IZ1KHY and David F4FKT met each other at Mario Zucchelli Station (WAP ITA-Ø1). Great rendez vous and now let’s hope they can be on the air … propagation permitting!

Good luck to them  for 5 more months staying in Antarctica!